VANCOUVER, BC – Vancouver Whitecaps FC (7W-7L-5D) claimed all three points against Chicago Fire (6W-8L-5D) on Saturday, holding on for a thrilling 3-2 victory in front of a sold-out BC Place crowd.

Kamara’s physical presence caused all kinds of problems for Chicago from the get go.

He helped set up Felipe and Alphonso Davies after some strong link-up play. Kamara also came close on a couple different occasions early, including a chipped attempt that narrowly missed Richard Sanchez’s goal. The pressure eventually paid off just before the half-hour mark.

The ‘Caps hit the Fire on the counter-attack following a tackle from Doneil Henry on Bastian Schweinsteiger. The ball eventually fell to Davies, who found a lively Yordy Reyna inside the box. The Peruvian fired a shot on goal that was saved by Sanchez, but the rebound fell to Kamara who made no mistake from close to open the scoring on 28 minutes. 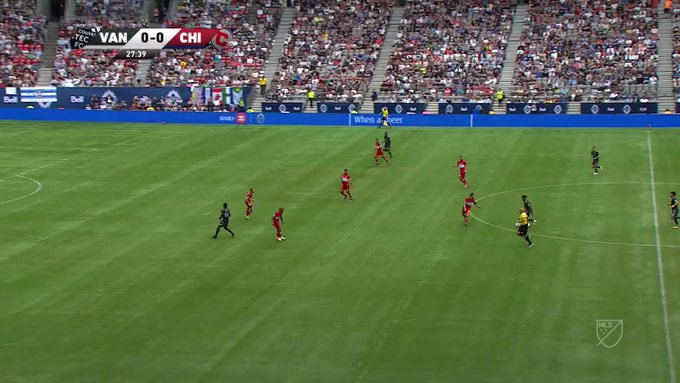 Moments after opening the scoring, the ‘Caps nearly doubled their lead through Davies. Reyna picked out the winger with a throughball, Davies showed his pace and broke free from his defender, but his breakaway effort hit the near post after Sanchez got a hand to his effort.

The visitors found the equalizer just before the halftime break.

Kevin Ellis broke past his defender inside the box before pulling the ball back to Nemanja Nikolic, who tapped the ball past ‘Caps keeper Brian Rowe on 42 minutes.

The ‘Caps wasted no time pressing for the go-ahead goal. Less than two minutes into the second half, Efraín Juarez found Mutch with a ball over the top. The Crystal Palace FC loanee rounded the keeper before finding the back of the net to give the ‘Caps a 2-1 lead.

A fast start to the second half for @WhitecapsFC! Jordon Mutch with his first MLS goal. #VANvCHI

Vancouver took a 3-1 lead on 72 minutes following a brilliant run for Davies. Marcel De Jong found Davies with a ball down the line. Davies ran down the left wing and showed great pace and balance before pulling the ball back to Kamara, who tapped the ball in past Sanchez. It was Davies’ team-leading eighth assist of the season, tying him for fourth in the league. 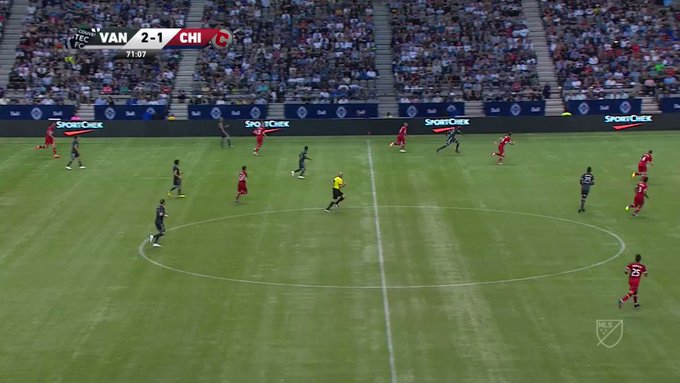 Chicago pulled one back late through former ‘Caps midfielder Tony Tchani. Following a corner kick, the ball bounced inside the box before finding Tchani, who fired a shot into the top-corner of the net to make it 3-2 on 81 minutes.

The visitors had a couple chances near the end to tie the match, including an Ellis header off the crossbar, but in the end the ‘Caps held on to secure a crucial three points.

Whitecaps FC begin a busy period of fixtures when they travel to Washington to take on D.C. United next Saturday. United will be unveiling their brand new Audi Field and Wayne Rooney is expected to make his MLS debut. Kickoff is set for 5 p.m. PT on TSN1 and 1410 AM radio.

MCMILLAN ‘CAPS CORNER KICK DONATIONS
For every ‘Caps corner kick at home, McMillan donates $100 to the United Way. An additional $500 is donated for every goal scored off a corner kick. This match McMillan Corners for Kids has donated $300 for a running total of $5,200.