Edem Mortotsi thought his professional soccer career was over after suffering a serious injury in 2015, but with the arrival of the Canadian Premier League (CPL), he has been given a second chance.

2015 was filled with a lot of highs and lows for the FC Edmonton midfielder. After a successful trial in Sweden, Mortotsi began attracting interest from various clubs in Sweden.

When he returned to Edmonton after his trial, he wanted to keep fit and continue getting touches on the ball, so he joined a men’s team.

But his life quickly turned upside down during a match.

“I just remember I heard this noise that sounded like a gun shot,” Mortotsi recalled. “Everyone who was there heard it. My foot went numb and I knew it wasn’t good.”

Mortotsi went to the doctors right away and found out he tore his achilles tendon.

“The first question I asked was how long will I be out for,” Mortotsi said. “I told the doctor I am an athlete and I can’t afford to be out for a long time. When he told me it would take over a year to be back on the field again, I thought my career was over.”

The thought of his childhood dream being taken away from him didn’t sit well.

“The first month I couldn’t do anything,” Mortotsi said. “I couldn’t drive so Allan Zebie would pick me up and drive me wherever I need to go. He really helped me a lot in the first month and throughout my recovery.

“I would literally go to the doctors whenever I had an appointment and come home. I kept overthinking everything that happened that day I got injured. And when you are left alone with your own thoughts for a month straight, then it takes you to a dark place. It messes with your mind.”

“And the pain I felt was something I wouldn’t wish on my worst enemy. There were times where the pain in my leg was so severe that I would pass out. I’d have to take pain killers before bed so when I woke up the pain wouldn’t be so bad and then again in the morning just so I could start my day.”

One day Mortotsi decided enough was enough and it was time to stop sulking and feeling sorry for himself. So with the continuous help of one of his best friends and teammates, Allan Zebie, he decided to make a change in his life before things got worse.

“One day I got up and just went to the gym,” Mortotsi said. “I was in crutches still and I was walking on one leg, so I couldn’t drive, but I decided I had to do something. So I started lifting weights and getting stronger.”

“I remember people looking at me in the gym thinking I was out of my mind and people would offer to help me move my weights around and stuff like that.”

Going to the gym every day changed Mortotsi life for the better. It made him realize how exercise can change someone’s mood completely and that’s when he began falling in love with the gym.

After seeing what impact it had on him, he decided to become a personal trainer and train people, which is something he does till today and plans on doing for the rest of his life.

Once Mortotsi was back on his feet – with a helping hand from the Gilroy family who treated him for 30 sessions– he got involved in the sport again. He began playing men’s league games and he started coaching with an academy that he co-founded, Train With Pros.

At this point, Mortotsi was okay with sticking to a career as a personal trainer and youth soccer coach.

But then came the arrival of the Canadian Premier League.

“Honestly when the league was announced I never thought I would be apart of it.” Mortotsi stated. “I had let go of the dream to play soccer and I was ok with it. I came to terms that it wasn’t going to happen for me and I started focusing on personal training and coaching.”

It wasn’t until the first series of Al-Classico took place in the Spring of 2018 that Mortotsi realized his story wasn’t over.

“When we played that day I got that feeling again.” Mortotsi said. “Like when we played in-front of that crowd and when I felt the atmosphere and the noise of the fans, I knew I wanted to make my comeback. I hadn’t played for a few months and I held my own that day. So I knew I could compete and that if I really wanted to do it, I could.”

Ever since that match, Mortotsi always seemed to be apart of Head Coach Jeff Paulus’ plans. Paulus allowed Mortotsi to train with the academy in order to build his fitness back up. And Mortotsi repaid the faith Paulus showed in him by never giving up again. 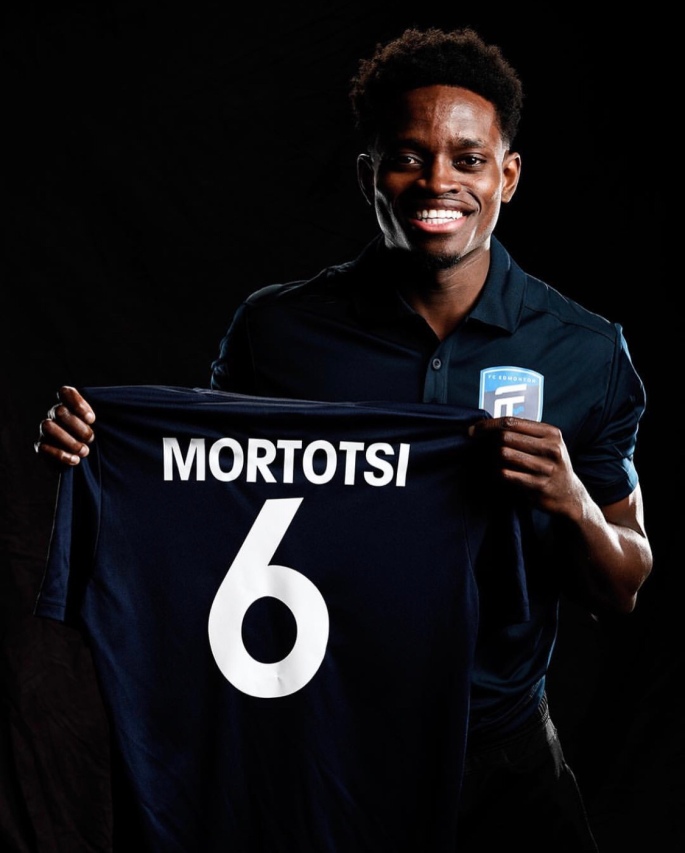 “Getting to play regularly again helped me a lot,” Mortotsi said. “I was very heavy because I was built like a body builder. I felt it in the game that I was heavy, too. I knew I needed to get quicker and be more agile and those sessions with the club helped me lose 10lbs.”

Paulus has always talked very highly of Mortotsi and has showed he believed in the midfielder since he was a teenager. Wherever Paulus went, he made sure he did his best to bring Mortotsi with him.

“Me and Jeff go way back,” Mortotsi said. “He’s my guy, man. He helped me figure out what to do with my life after high-school. He scouted me when I was a youth player, he signed me to NAIT and he always looked after me.

“We won nationals together and he brought me to FC Edmonton with him during the NASL. And now he has brought me back again.”

“He’s the kind of coach that knows how to connect with his players, he knows how to get the best out of us and it’ll be no different this year. You can already see it in our training sessions. You can see it in the locker rom and with our team chemistry already. He’s brought a lot of us back together again and we’ve become a family already.”