If you want to be a championship winning side, you need a group of players who have a winning mentality.

For FC Edmonton, that’s exactly what Bruno Zebie, Ajeej Sarkaria and Ajay Khabra bring to the table. The Eddies trio have a reputation of being serial winners. Winning is in their blood. Whenever they have been apart of a team together, as a trio or as a duo, one thing has always been guaranteed.

The three FC Edmonton academy graduates started their journey together in the local soccer scene playing for Edmonton Juventus. Originally Zebie and Khabra played at an older age group before dropping down to their age group for the national championship year in 2008.

That year marked the beginning of a special bond. They went on to win a treble in their first outdoor season together. They won the league championship, followed by the provincial championship, and a national championship in Nova Scotia to cap off a successful first year together. 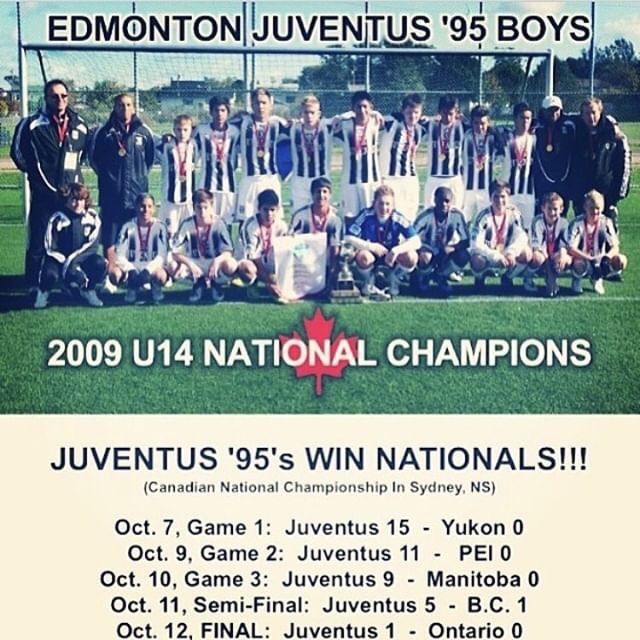 “I think when you get older, you realize what actually went into it all,” Khabra said. “The first time we had a lot of talented players, we worked hard for it, our expectations were that we are going to win.”

“The week before we left, we all handed in these papers to the coaches with what our goals were, and almost every single person wrote we want to win gold. So when we won, it was great, it was a great celebration, but that was our expectation. But after, it was like what’s next?”

The answer to his question was post-secondary soccer. Khabra was apart of University of Alberta Golden Bears for three years before Zebie and Sarkaria joined him. Khabra noted that the Bears were always competitive, but the additions of Zebie and Sarkaria took them to the next level.

In their first season together with the Bears, they nearly went an entire season without losing before being crowned Canada-West champions and U-Sports national champions.

“That year was probably the most enjoyable year I had soccer wise,” Zebie said. “Everything just clicked, I don’t think other teams had answers for us. We had an unreal run, we almost went undefeated. We lost the one game to Lethbridge and it was just one of those game too where we still don’t know how we lost. But, we went into nationals, and everyone played great. From top to bottom, we all did really well.”

“At first it was a shock when we got there, we had a four percent chance to make the finals,” Sarkaria said in regards to the loss in the PDL championship in 2016. “We were up 2-1 with about 15 minutes to left, we fell apart and it was devastating.”

But when Zebie joined him in Calgary, the pair added another championship to their collection in 2018.

“Winning the championship was a big deal for us,” Zebie added. “We wanted to prove that us Canadians are just as good as those PDL players who get drafted into the MLS. There is a lot of good players in that league, I feel like a lot of Canadian PDL players got overlooked a lot. A lot of the guys [from the states] that we played in our conference got drafted in the MLS and they are playing, they are getting minutes, and I feel like some of us should have got that chance too.”

The trend continued when Khabra and Zebie won the Mini World Cup with India in 2017. It’s the biggest tournament in Edmonton, which takes place every two years in. Both players were a key part in India’s success that year.

It’s easy to create a bond with people when you have to spend a lot of time together. For the three of them, they grew up playing soccer together, they went to the same junior high and high school. They were apart of Alberta Soccer, National Training Centre and they came through the FC Edmonton Academy together.

Their relationship quickly grew from being teammates, to friends, and now to family.

“Whenever we go to each-others house, our parents get very happy because we all grew up together,” Zebie said. “We would have about anywhere between 10 to 15 practices a week, so we would always be together. That’s how it all started for the three of us.”

“[Edmonton] is where everything started for us. Every challenge we had, we rose to the occasion together. We have been there for each-other through the highs and the lows. We have always had each-others back no matter what. And we feel that whenever we are together, we are going to win something.”

Now, the trio get to embark on their professional careers together after being presented as FC Edmonton players on the same day.

“These are memories we are going to cherish for the rest of our lives,” Sarkaria said. I feel like they are my brothers, its amazing to win all those championships together and be at a professional level together now, not many people get the chance to do that and it’s amazing.”

“We don’t take it for granted. These opportunities are incredible, not many people get to do this. Even at the Dominican trip, it kind-of just hit us what we’ve accomplished and we just took it all in. We get to travel the world together and play professional soccer together. What could be better than that.”

Their winning mentality will only help Edmonton become successful. The experience gained throughout their 10-year journey together has been immense and you get a real sense of maturity and natural leadership when you talk to them. They understand what it takes to be a champion and they hope their “contagious” winning mentality will help the Eddies achieve their goals in 2019.

“One of the main things is you have to have the commitment to win,” Khabra noted. “On any of the teams we’ve been on and won, we had different roles. We realized through winning that you have to fulfill the role you’ve been given. The roles we had with Juventus was different than on our university team, and I’m sure for Bruno and Ajeej, their roles with Foothills was different as well.”

“We are in a professional environment now. Everyone has high standards, we understand that initially our role might not be the same in university, but we have to fulfill the roles given to us. Because to win it requires every single person on the team. We know how much sacrifice and commitment it takes to win. It’s not easy, both mentally and physically, we know that, but we are committed to winning here and we have all the pieces to win something here.”

Winning a championship together with FC Edmonton will undoubtable be their biggest challenge, but they relish the opportunity to continue their tradition of winning together. Neither player is afraid of any task presented to them and they relish the challenge of becoming champions once again.

“The goal is to win the championship and go as far as we can to go in the Canadian Championship,” Zebie added. “Honestly, yes the MLS team are better on paper, but we are not afraid of them. Those are the games we want to play, against the best players in the big stadiums. We aren’t scared of any challenge.”

The Eddies are weeks away from their home opening. For the trio, it will make a special moment. They will have the chance to put on the FC Edmonton jersey together, walk out to a packed Clarke Stadium, which will be filled with their loved ones, and they’ll get the chance to make their Canadian Premier League debut together. The thought of that brings a special sparkle in their eyes, the smiles on their face is a clear indicator that it will be a special moment for themselves and their families.

“Its so special, we developed as people and as a soccer players in this community,” Khabra said. “Everyone has supported us in this community so its such a nice feeling to show we worked hard and we are finally here. There is obviously more work to do, but its nice to celebrate it with everybody. And we can show the younger guys that hey, you can develop here and get somewhere. We want to show the youth there is somewhere you can go in Edmonton.”