In their 13th annual Teddy Bear Toss night, the Edmonton Oil Kings came in riding a four-game winning streak that would be snapped by their Calgary rivals 3-2 in overtime. Edmonton would storm back after being down 2-0 to tie the game, but Jett Woo would play the hero for Calgary on a partial breakaway in the extra frame roofing his backhander just under the bar.

It didn’t look good for Edmonton to score early on but, Ethan McIndoe would finally release the teddy bears after he deflected a Matthew Robertson point shot on the powerplay to cut the lead in half with 50.6 seconds left in the second period.

FINALLY @EdmOilKings score with 50 seconds left in the second to release the teddies pic.twitter.com/8iqq2cWgBf

“It was super exciting, I think everyone was hoping to get that goal tonight and fortunate enough for me I was able to get a stick on the shot from ‘Robo’ up top and was able to find the back of the net,” said McIndoe on scoring the Teddy Bear Toss goal.

Edmonton is now at 7-6 all-time in Teddy Bear Toss games, but every year it’s for a great cause as the proceeds go the Stollery Children’s hospital.

The Hitmen would strike first when Riley Stotts was unmarked alone in front and tucked it through Sebastian Cossa’s legs 3:40 into the first period.

The Alberta rivals had no love lost between them getting into a few post-whistle scrums, after an intense game Friday night in Calgary boiled over to Saturday’s game, which saw the teams take 50 combined penalty minutes.

In his first Teddy Bear Toss game, rookie Dylan Guenther streaked down the right side on a partial breakaway and wired a shot that beat the goalie but clanged off the iron, which kept the score 1-0 Calgary.

“I think tonight it might have distracted us a little bit but once it went in the net, we found our game again,” said McIndoe. “But we didn’t play a full sixty minutes and we’re going to learn from it.”

Cossa needed to be sharp in the first frame making a few key saves because the Hitmen were pouring on the pressure and outshot the Oil Kings 13-6 after one period of action. The rookie’s continued stellar play had him entering Friday’s game with the 4th best goals-against average (2.23) and save percentage (.921%) 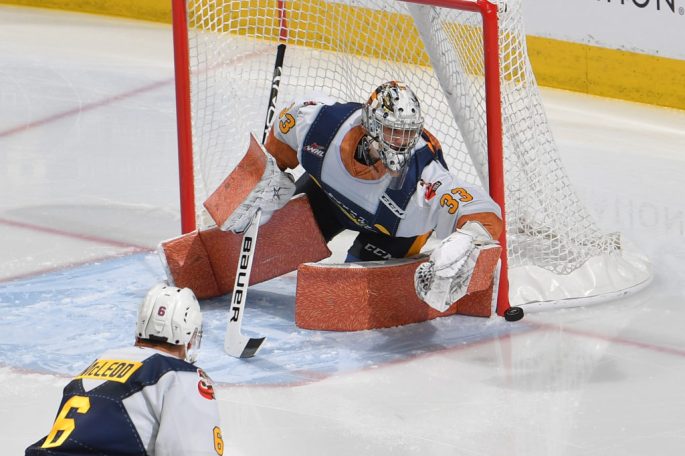 The Hitmen kept pushing and would finally double their lead on the powerplay from a Mark Kastelic deflection off a point shot coming at 9:06 into the second frame.

Despite being heavily outshot 29-12, the Oil Kings entered the third period down just one goal. They almost tied the game after an incredible solo effort by Josh Williams who danced around his defender and drove hard to the net but his ensuing shot would go just wide.

Williams would eventually get that tying goal off one of the craziest sequences of the night when we poked home a loose puck to knot this game at 2-2, 7:36 into the final frame. An original shot from the left point would clang off the inside of the post, ricocheted off the other post and laid behind an unsuspecting McNaughton where Williams would pounce on it after circling the net.

“Our first forty minutes is definitely not what we wanted, it wasn’t a great start,” said Williams. “I think they took it to us but we turned it around in the third which a positive and were able to take a point tonight which is always good.”

Regulation would solve nothing as the fierce Alberta rivals would head to extra time. In the extra frame, Guenther would create two great scoring chances for the Oil Kings but couldn’t solve McNaughton.

The Oil Kings will kick off a short two-game home series against the Swift Current Broncos starting Wednesday the 11th and finishing on Friday the 13th.